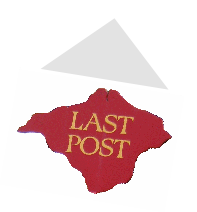 This is one of those psuedo-pillarboxes that were made up for   very grand residences.

It is modelled on the first standard pillar so I stood it next to it.

They can cost the earth these little boxes as they fall into the   antique furniture bracket.

I didn't pay much as it sort of slipped through the e-bay net   when I was the only bidder!

Okay it was slightly more ornate with a brass crest on the front   and an opening lower stamp drawer, but hey, my £200 looks   like a bargain!

Back to Stories Page